Every Thursday, California resident Richard Redmond takes a gallon-sized container of food scraps to the farmers market in the city of South Pasadena where it is collected and composted for use in gardens – an effort to reduce the amount of household waste he sends to landfill.

“It’s just stunning,” the web designer, who is in his 60s, said. “You can see how separating it just reduces the amount of garbage you are putting out.”

Redmond’s experience is a tiny window into a huge global problem, and not enough people are with him.

Every year, the world throws away around 931 million tons of food, most of it ending up in landfills, where it decomposes to produce around a tenth of the world’s climate-warming gases, according to the United Nations.

That’s a major challenge for countries tackling global warming at the COP27 climate summit underway in Egypt. Nations around the globe pledged in 2015 to halve food waste by 2030, but few are on track to do so, according to officials from the United Nations, sustainability watchdogs, and governments interviewed by Reuters.

“Eight years to go and we are nowhere close to reaching that goal,” said Rosa Rolle, the team leader for food loss and waste at the UN’s Food and Agriculture Organization.

Among the top five biggest food wasters per capita, for example, at least three – the United States, Australia and New Zealand – have increased their food waste since 2015, according to independent estimates that their governments do not dispute. Reliable information for the other two, Ireland and Canada, was not available.

The problem is not limited to richer countries, either. A UN study last year found “negligible” correlation between household food waste and gross domestic product, indicating most countries “have room to improve.”

The bleak performance is due to a lack of public investment and clear policies to counter things like food spoilage in trucks and warehouses, wasteful consumer habits, and confusion about expiration and sell-by dates, experts said.

Complicating the issue is a lack of transparency. When the U.N. General Assembly adopted the 2015 food waste goal, it did not establish a clear benchmark against which to measure progress because of spotty country-level estimates.

U.N. agencies and nonprofits attending COP27 will ask governments on Nov. 16 to renew their pledges and provide progress reports at next year’s summit in Dubai, Rolle said.

The average American wastes more than 700 calories of food per day – about a third of recommended daily intake – according to a 2020 study by researchers in Switzerland and India, making America’s progress an important benchmark for other nations.

The country is no role model yet. The amount of food wasted in the United States rose 12% between 2010 and 2016 and has since plateaued, according to ReFED, a waste reduction group that works closely with the U.S. government.

“We do have a long way to make the goal,” said Jean Buzby, the food waste liaison at the U.S. Department of Agriculture.

Part of the problem is a lack of federal leadership.

The USDA, the Environmental Protection Agency and the Food and Drug Administration agreed in 2018 to tackle America’s food waste together. But they’ve devoted few resources to the effort since, said Dana Gunders, executive director of ReFED.

USDA and FDA each have just one full-time staff person dedicated to food waste, the agencies told Reuters. EPA declined to give a number, saying the work was spread across several offices.

“What real focus would look like on this topic would be for each of these agencies to dedicate staff, to give those staff funding to implement things,” Gunders said.

The USDA and EPA said they do not track spending on food waste initiatives. The FDA did not comment on its spending.

In the meantime, the agencies are relying on the private sector to help. Forty-seven companies, including food retailer Ahold Delhaize and processor General Mills, have made pledges to halve their food waste by 2030 as part of a voluntary USDA and EPA program launched in 2016.

Some 15 of those companies have provided updates on their websites showing they have cut waste. Neither EPA or USDA verifies their progress.

Beyond the federal level, just five states have passed laws to keep food out of landfills, according to the National Conference of State Legislatures. They are California, Connecticut, Massachusetts, Rhode Island and Vermont. ReFED considers just two of those to be strong policies because they cover most businesses and individuals.

The other countries in the top five wasters have also been slow even to set a baseline to measure progress.

In New Zealand, the percentage of food households tossed into the bin rose to 13.4% in 2022 from 8.6% in 2021, according to a report by research firm Katar. A spokesman for New Zealand’s environment ministry said the country is finalizing its baseline food waste estimate so it can establish a target.

Spokespeople from Canada, Australia and Ireland also said their countries were committed to the goal but did not say what progress had been made so far.

At least one big economy, by contrast, is doing well.

The United Kingdom reduced food waste by 27% between 2007 and 2018, according to The Waste and Resources Action Programme, an organization that tracks the nation’s progress. Its campaign included eliminating “best by” dates on packaging, redistributing unused food to charities, and public education on meal planning.

In California, which has America’s most ambitious climate policies, officials are trying to ensure food waste goes to composting, not landfills. But it’s a struggle.

Composting food emits less greenhouse gas than landfilling because the decomposition happens in open air instead of in a covered pit. When food rots without air exposure it produces methane, one of the most powerful greenhouse gases.

The state in 2016 passed a law requiring a 75% reduction in landfilling of organic waste by 2025. But in 2020, the state was moving in the wrong direction, throwing 2 million tons more food into landfills than in its baseline year of 2014.

The delays are due in part to a lack of facilities to handle the organic waste and a tight 13-month timeline between when regulations were finalized and when they were required to be implemented, according to the League of California Cities, which represents the state’s municipalities.

In the Southern California community of Apple Valley, however, town officials are ready, and have equipped residents with 35-gallon carts for organic waste.

The service has driven consumer bills for waste collection up several dollars a month, but it is money well spent, said Guy Eisenbrey, director of municipal services.

“We’re basically trying not to be the slowest gazelle in the pack.” 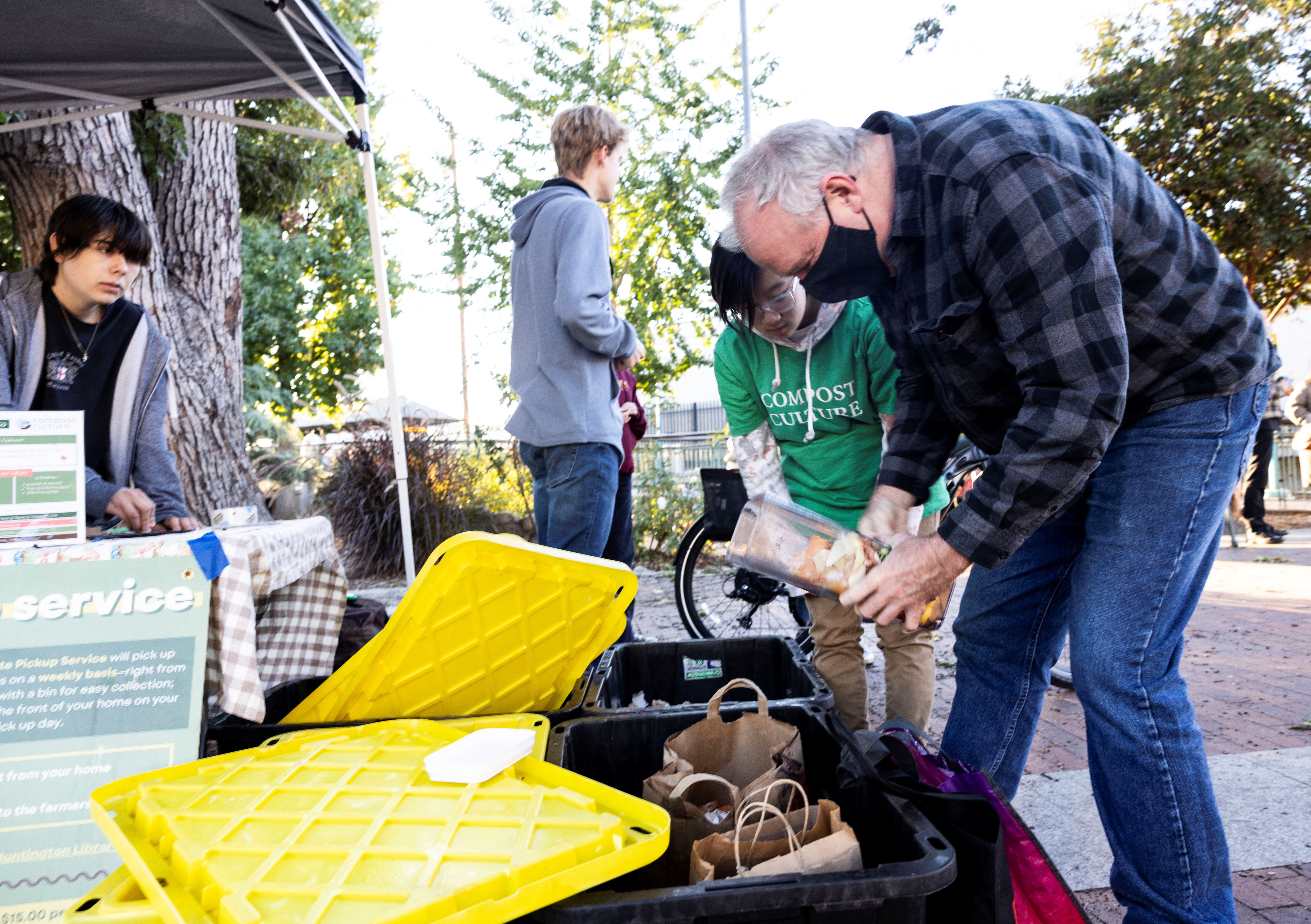 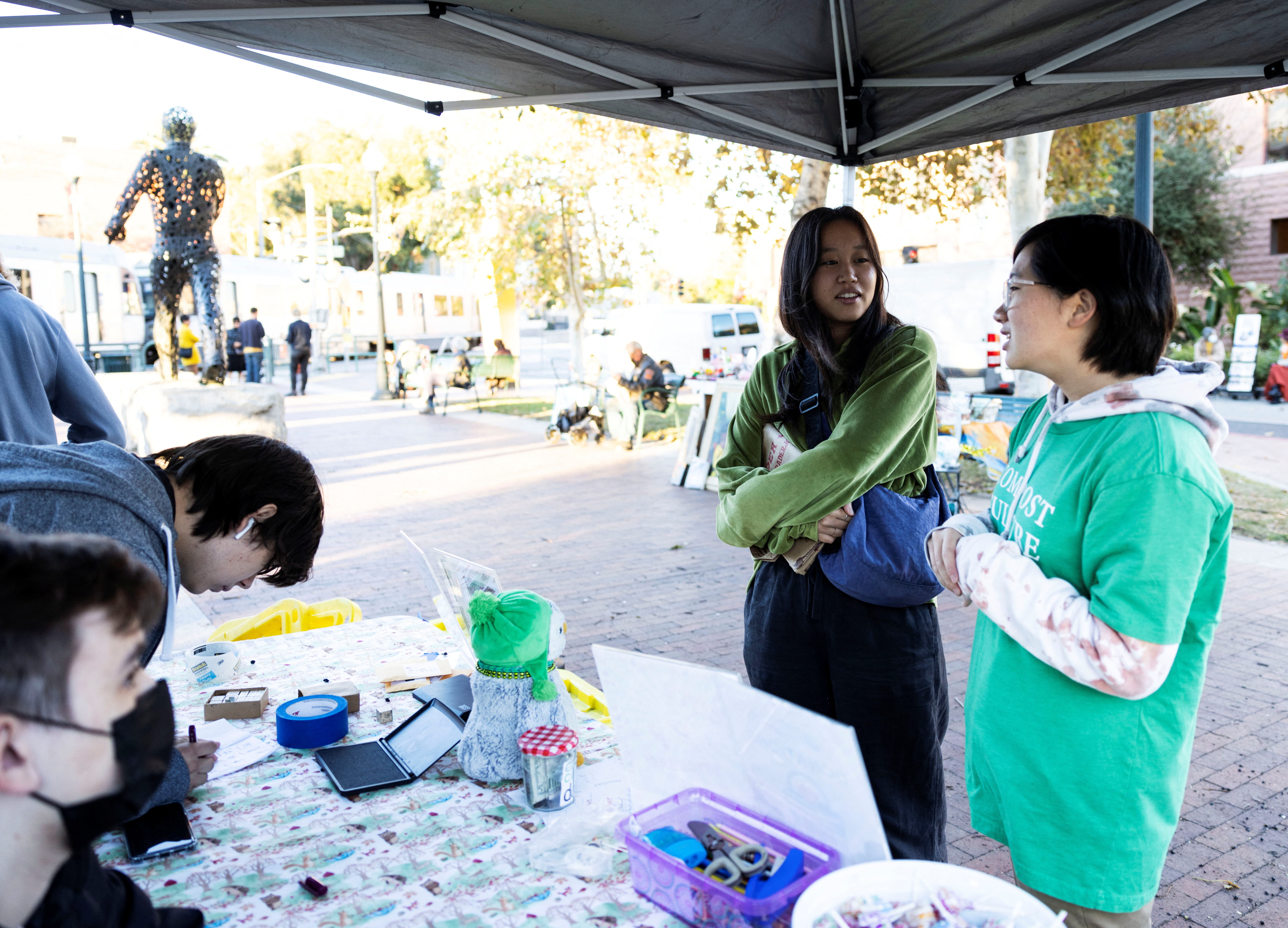 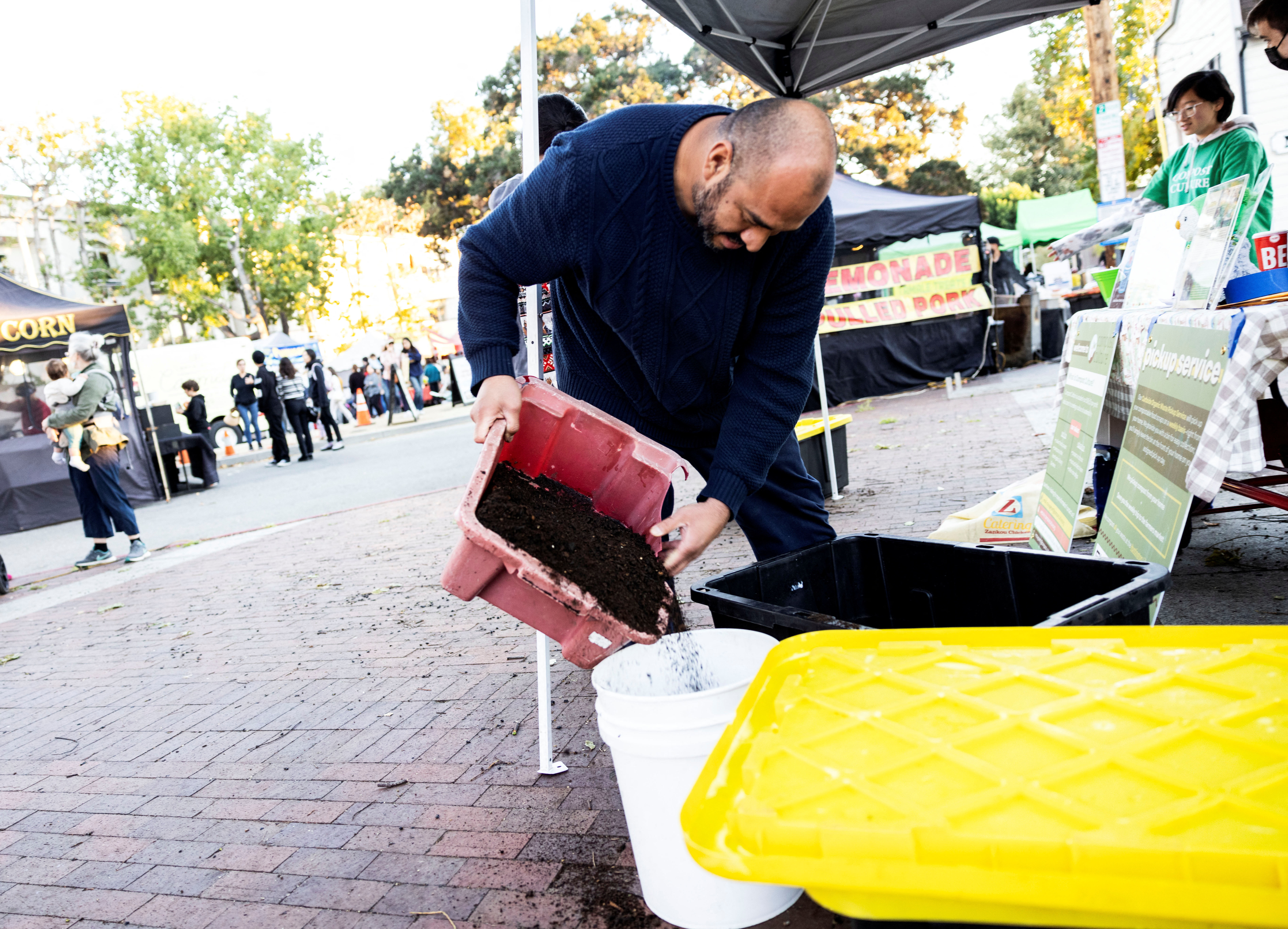 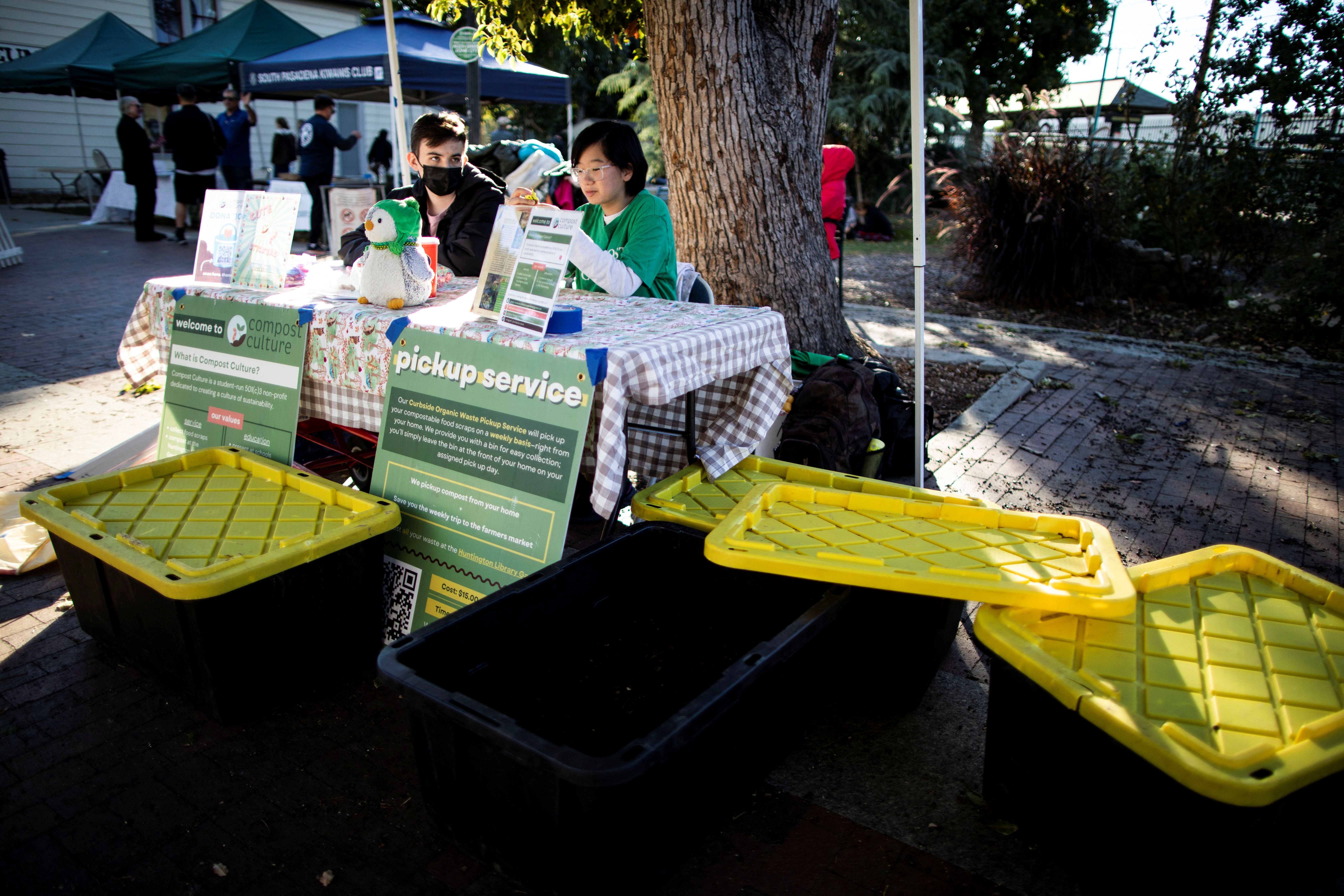