The Senate is set to remain under Democratic control in 2023, while the majority in the House of Representatives remains unsettled—though most projections suggest Republicans will enjoy a very narrow majority. Much attention is already being paid to what’s to come in January, but before the 118th Congress is sworn in, the 117th Congress must finish its work in the so-called “lame duck” session. Here are four things to watch:

Two fiscal issues are likely to be a major focus of the last weeks of the 117th Congress: getting an omnibus spending bill done and deciding whether or not to deal with the debt limit.

The current measure funding discretionary federal programs expires on December 16, so avoiding a partial government shutdown requires action before that deadline. Prior to the passage of the current stopgap measure in September, factions of House and Senate Republicans had lobbied to run a temporary spending bill into January 2023 in possible anticipation of a new majority with different spending priorities.

With Republicans likely to take control of the House—albeit narrowly—Democrats will be especially eager to complete work on a full omnibus package for the balance of the fiscal year. Doing so will require both parties actually completing negotiations on a package and ensuring it has the support of at least 10 Republicans in the Senate necessary to end a filibuster. The expected difficulty of managing the House under a narrow Republican majority in January may factor into some members’ calculations; a high-stakes showdown over keeping the government open just weeks into a new Congress may be an unattractive enough proposition for some GOP legislators that they will be willing to leave it to the lame duck session.

Given the expected narrow House Republican majority, Democrats will also need to decide whether to try to address the debt ceiling in the lame duck or leave it on the agenda for next year. Estimates put the date by which the debt limit will need to be addressed at some point in the third quarter of 2023, but lessons from the last shift to a Republican House majority under a Democratic president loom large. Indeed, in 2011, the newly GOP-controlled House saw a sizable faction of members insist on large spending cuts in exchange for their support in raising the debt limit. A complicated deal in the form of the Budget Control Act of 2011, which imposed discretionary spending caps for a decade, meant catastrophe was averted, but threats from Republicans could produce a similar showdown next year. Democrats have legislative options for preemptively addressing the debt limit in the lame duck, but will have to decide whether the brinkmanship being proffered by Republicans means they should spend time and political capital on the issue before the end of the year.

While fiscal issues will be front and center, several other legislative items also remain ripe for further action. Reports indicate that one such measure, to codify the federal recognition of same-sex marriages, is likely to be voted on as soon as this week in the Senate; the House had passed a similar bill prior to the elections. Other priorities include reforms to the Electoral Count Act, additional aid to Ukraine, funding for fighting the ongoing COVID-19 pandemic, and extending expiring tax provisions. One item that is especially likely to move—and, perhaps, carry along with it some other provisions—is the National Defense Authorization Act, or NDAA. The annual defense policy bill is seen as a must pass measure, but as a result, it can end up bearing political conflicts that slow down its progress.

And finally, since May 2020, House members have had the option of voting via proxy—that is, designating a colleague who, after receiving directions from the absent member, votes on the floor in his or her place. Originally designed as a way to reduce individual and collective risk from COVID-19, proxy voting has been used more expansively through 2021 and 2022, including by several members running for higher office who, perhaps, took advantage of the procedure to spend more time on the campaign trail.

Proxy voting’s future in the 118th Congress is in doubt. If elected Speaker of the House, Kevin McCarthy has pledged to end the practice—and while his narrow majority may alter that calculation, it is certainly possible that the final weeks of the 117th Congress will also be the final days of proxy voting. Either way, expect the lame duck to feature proxy voting heavily. In 2020, there were 226 new proxy designations between Election Day and the end of the session, including eight departing members who designated a proxy for the first time.

In the contemporary Congress, deadline-driven legislating is a common occurrence, with the specter of the winter holidays often looming as an especially powerful action forcing mechanism. This year looks to be no different. 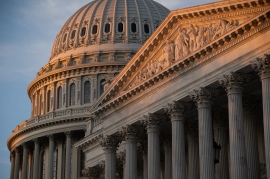