Republicans were projected to win a majority in the U.S. House of Representatives on Wednesday, setting the stage for two years of divided government as President Joe Biden’s Democratic Party held control of the Senate.

The victory gives Republicans the power to rein in Biden’s agenda, as well as to launch potentially politically damaging probes of his administration and family, though it falls far short of the “red wave” the party had hoped for.

The final call came after more than a week of ballot counting, when Edison Research projected Republicans had won the 218 seats they needed to control the House. Republican victory in California’s 27th Congressional district took the party over the line.

The party’s current House leader, Kevin McCarthy, may have a challenging road ahead as he will need his restive caucus to hold together on critical votes including funding the government and military at a time when former President Donald Trump has launched another run for the White House.

While the loss takes away some of Biden’s power in Washington, he has signaled he expects Republicans to cooperate. In a news conference last week, he said, “The American people have made clear, I think, that they expect Republicans to be prepared to work with me as well.”

Democrats have been buoyed by voters’ repudiation of a string of far-right Republican candidates, most of them allies of Trump, including Mehmet Oz and Doug Mastriano in Pennsylvania’s Senate and governor’s races respectively, and Blake Masters in Arizona’s Senate contest.

Even though the expected “red wave” of House Republicans never reached shore, conservatives are sticking to their agenda.

In retaliation for two impeachment efforts by Democrats against Trump, they are gearing up to investigate Biden administration officials and the president’s son Hunter’s past business dealings with China and other countries – and even Biden himself.

On the international front, Republicans could seek to tamp down U.S. military and economic aid to Ukraine as it battles Russian forces.

The United States returns to its pre-2021 power-sharing in Washington as voters were tugged in opposite directions by two main issues during the midterm campaigns.

High inflation gave Republicans ammunition for attacking liberals, who won trillions of dollars in new spending during the COVID-19 pandemic. With voters seeing their monthly grocery, gasoline and rent bills rising, so rose the desire for punishing Democrats in the White House and Congress.

At the same time, there was a tug to the left after the Supreme Court’s June ruling ending the right to abortion enraged a wide swath of voters, bolstering Democratic candidates.

Edison Research, in exit polls, found that nearly one-third of voters said inflation topped their concerns. For one-quarter of voters, abortion was the primary concern and 61% opposed the high-court decision in Roe v. Wade.

While the midterms were all about elections for the U.S. Congress, state governors and other local offices, hovering over it all was the 2024 U.S. presidential race.

Trump, who still polls as the top choice among Republicans for the party’s presidential nomination, nevertheless suffered a series of setbacks as far-right candidates he either recruited or became allied with performed poorly on Nov. 8.

At the same time, Florida Governor Ron DeSantis coasted to a second term, defeating Democratic opponent Charlie Crist by nearly 20 percentage points, as some conservative Republican voters also voiced fatigue with Trump. The former president reportedly was seething over the high marks political pundits were doling out to DeSantis, possibly shaking up the 2024 field of Republican presidential candidates.

The 2024 election will immediately influence many of the legislative decisions House Republicans pursue as they flex their muscles with a new-found majority, however narrow.

They have publicly talked about seeking cost savings in the Social Security and Medicare safety-net programs and making permanent 2017-enacted tax cuts that are due to expire.

Conservatives are threatening to hold back on a needed debt-limit increase next year unless significant spending reductions are achieved.

First, the House must elect a speaker for the next two years. House Republican Leader McCarthy on Tuesday won the support of a majority of his caucus to run for the powerful position to succeed Nancy Pelosi.

With such a narrow majority, McCarthy was working to get commitments from nearly every member of his unruly Republican members, having failed in just such an endeavor during a 2015 bid. Freedom Caucus members, about four dozen in all, could hold the keys to his winning the speakership and the viability of his speakership writ large. 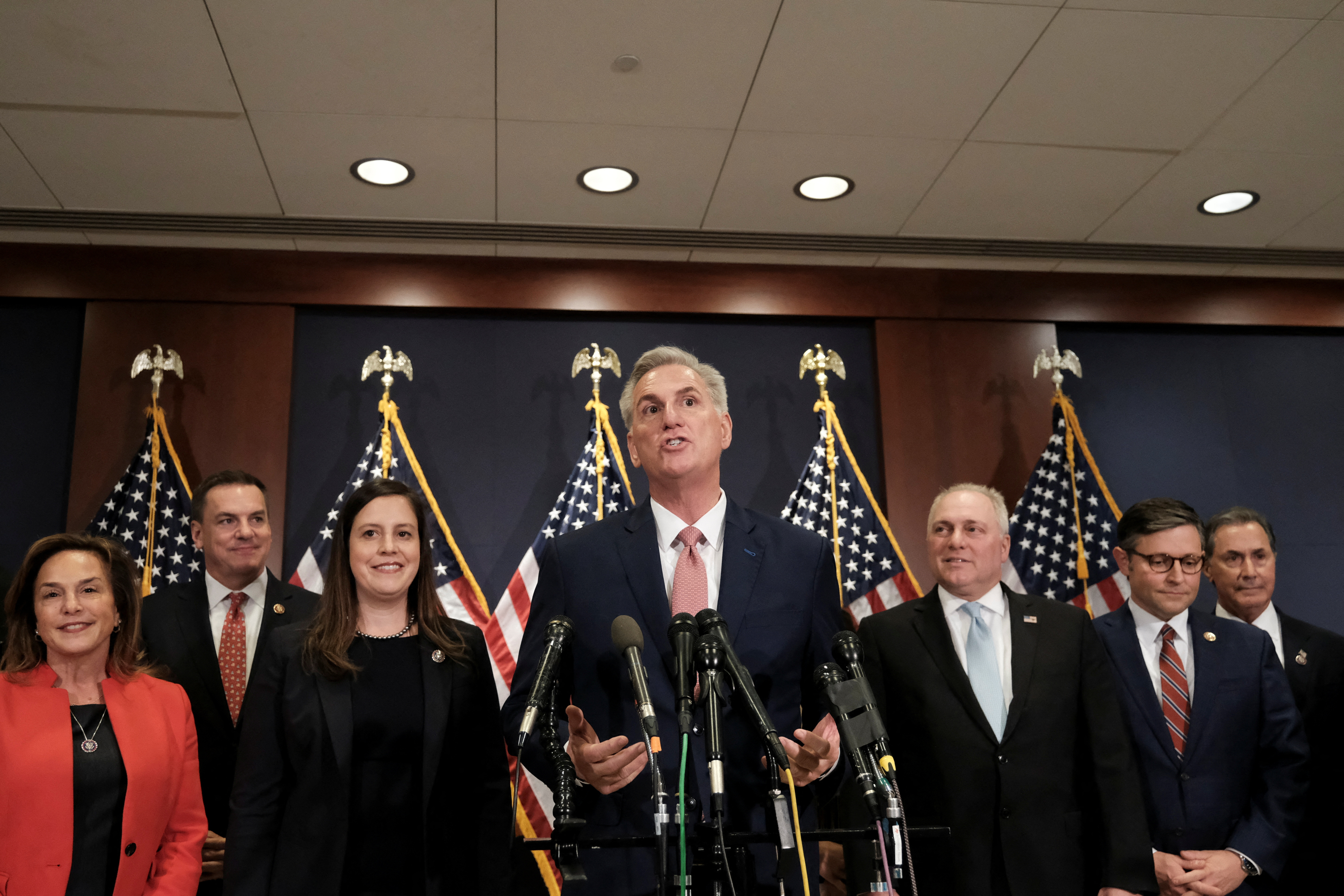 House Republican Leader Kevin McCarthy (R-CA) speaks to reporters after McCarthy was nominated by fellow Republicans to be their leader or the Speaker of the House if they take control in the next Congress, following House Republican leadership elections at the U.S. Capitol in Washington, U.S., November 15, 2022. REUTERS/Michael A. McCoy 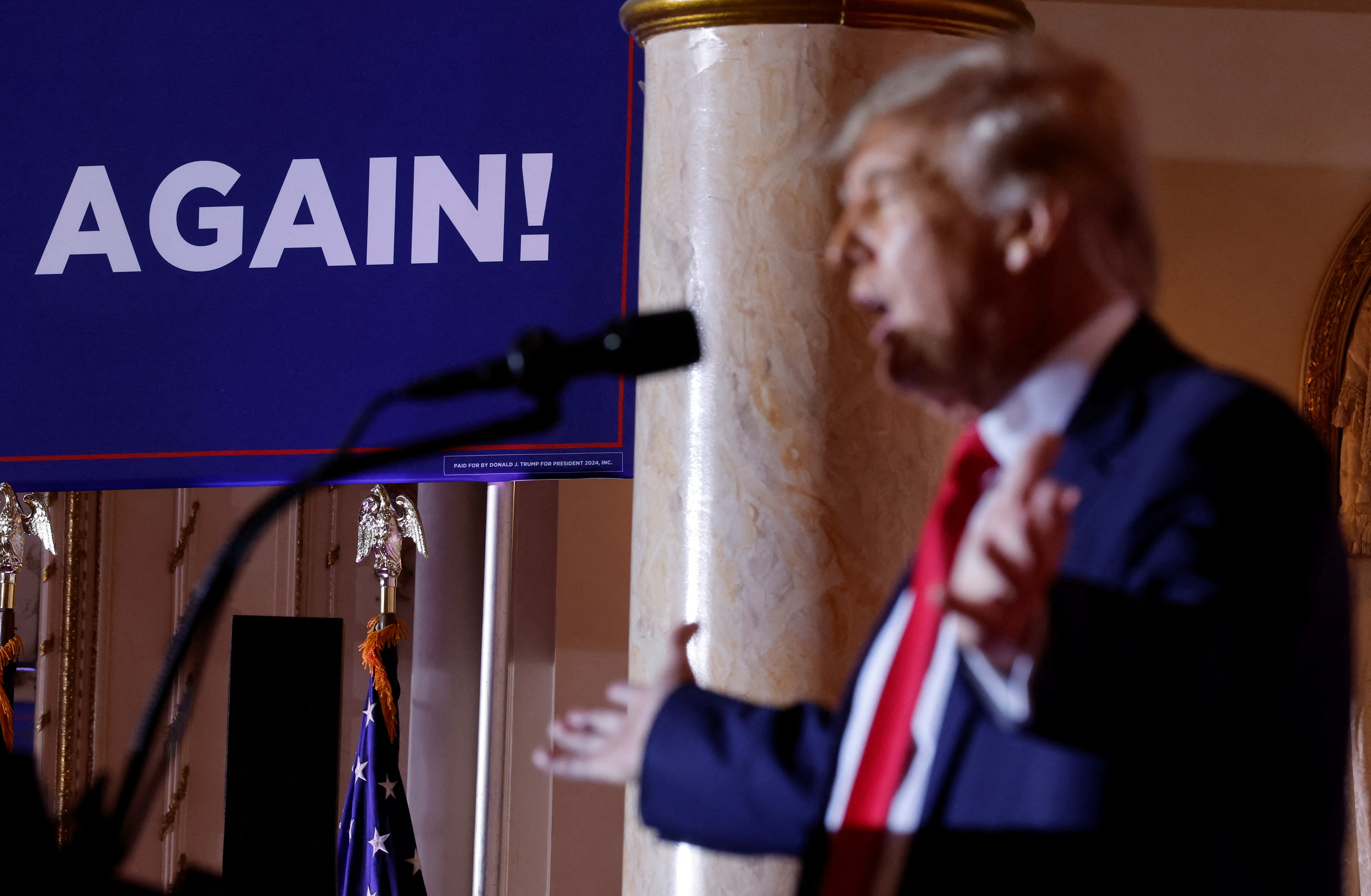 Former U.S. President Donald Trump announces that he will once again run for U.S. president in the 2024 U.S. presidential election during an event at his Mar-a-Lago estate in Palm Beach, Florida, U.S. November 15, 2022. REUTERS/Jonathan Ernst 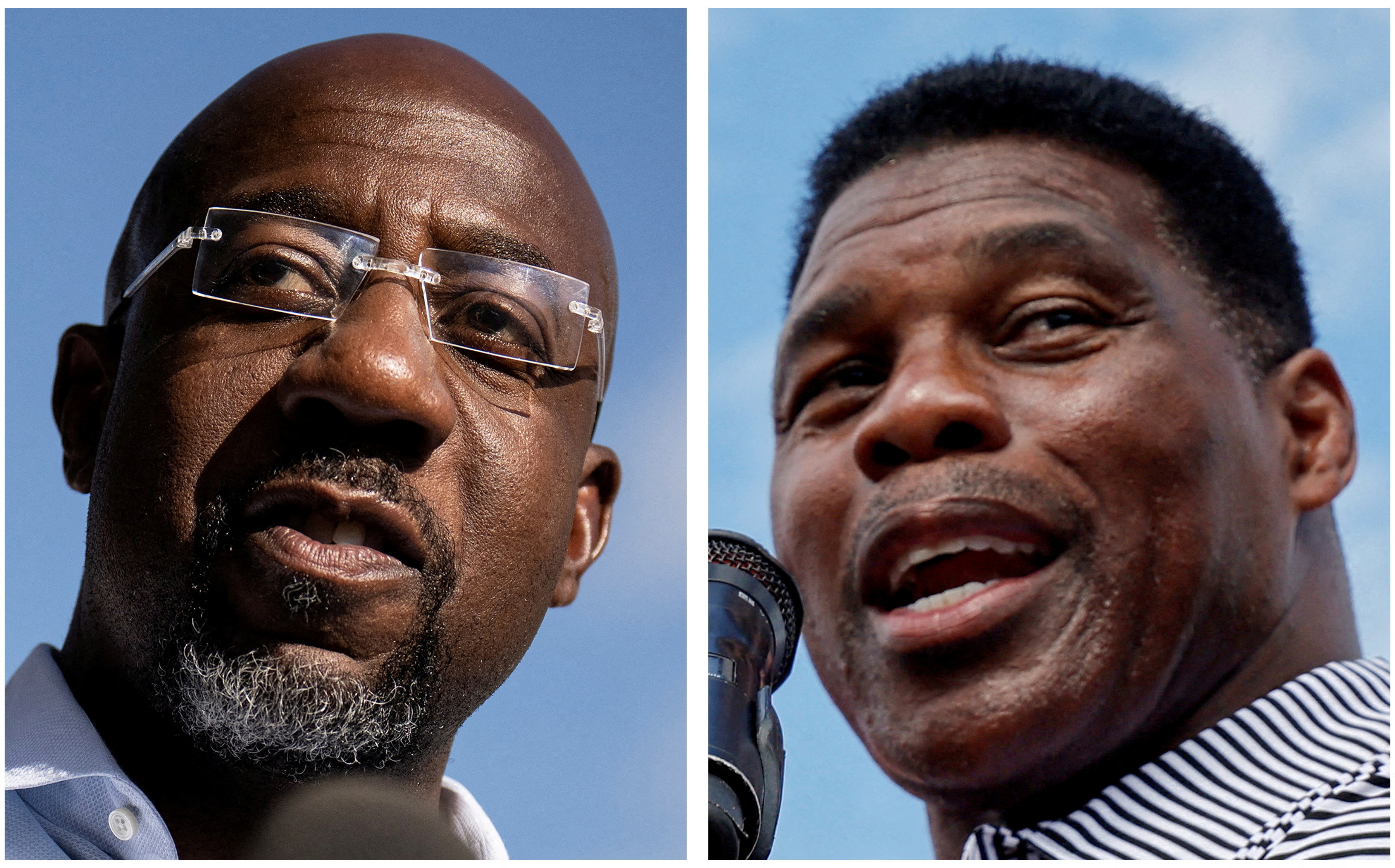