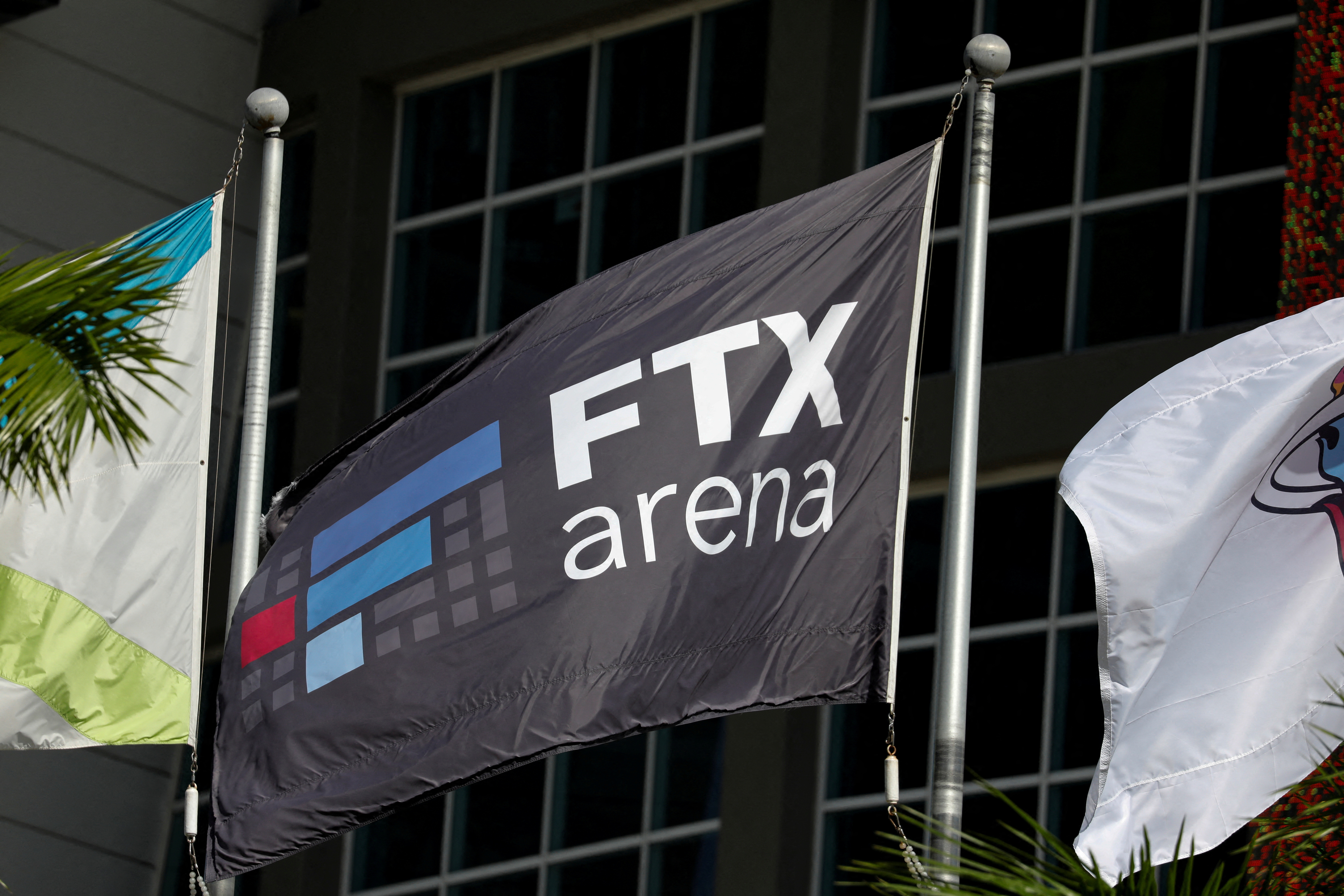 The logo of FTX is seen on a flag at the entrance of the FTX Arena in Miami, Florida, U.S., November 12, 2022. REUTERS/Marco Bello/File Photo

Before it collapsed this month, FTX stood apart from many rivals in the largely unsupervised crypto industry by boasting it was the “most regulated” exchange on the planet and inviting closer scrutiny from authorities.

As part of that deal, Bankman-Fried bought a 10% stake in IEX, with an option to buy it out completely in the next two and half years, according to a June 7 document. The partnership gave the 30-year-old executive the opportunity to lobby IEX’s regulator, the U.S. Securities and Exchange Commission, on crypto regulation.

That deal and others referenced in the documents, which include business updates, meeting minutes and strategy papers, illuminate one of FTX’s broader goals: quickly crafting a congenial regulatory framework for itself by acquiring stakes in companies that already had licenses from authorities, shortcutting the often drawn-out approval process.

FTX spent some $2 billion on “acquisitions for regulatory purposes,” the FTX documents seen by Reuters from a Sept 19 meeting show. Last year, for example, it bought LedgerX LLC, a futures exchange, which gave it three Commodity Futures Trading Commission licenses in one swoop. The licenses gave FTX access to U.S. commodities derivatives markets as a regulated exchange. Derivatives are securities that derive their value from another asset.

FTX also saw its regulatory status as a way of luring new capital from major investors, the documents show. In documents to support its ask for hundreds of millions of dollars in funds, it held out its licenses as a key competitive advantage. The “regulatory moats,” it said, created barriers for rivals and would give it access to lucrative new markets and partnerships beyond the reach of unregulated entities.

“FTX has the cleanest brand in crypto,” the exchange proclaimed in a June document presented to investors.

In a text exchange this week with Vox, Bankman-Fried made an about-face on regulatory matters. Asked if his prior praise of regulations was “just PR,” he said in a sequence of texts: “yeah, just PR… fuck regulators… they make everything worse… they don’t protect customers at all.”

An IEX spokesperson declined to confirm details of the transaction with FTX, except to say that FTX’s “small minority stake” in IEX cannot be sold to a third party without its consent. “We are currently evaluating our legal options with respect to the prior transaction,” the spokesperson said.

FTX collapsed last week after a futile bid by Bankman-Fried to raise emergency funds. It had come under some regulatory oversight through the dozens of licenses it picked up via its many acquisitions. But that didn’t protect its customers and investors, who now face losses totaling billions of dollars. As Reuters reported, FTX had been secretly taking risks with customer funds, using $10 billion in deposits to prop up a trading firm owned by Bankman-Fried.

Four lawyers said the fact that Bankman-Fried was courting regulators while taking massive risks with customer funds without anyone noticing exposes a yawning regulatory gap in the cryptocurrency industry. “It’s a patchwork of global regulators — and even domestically there are huge gaps,” said Aitan Goelman, an attorney with Zuckerman Spaeder and former prosecutor and CFTC enforcement director. “That’s the fault of a regulatory system that has taken too long to adjust to the advent of crypto.”

A person familiar with the SEC’s thinking on crypto regulation said the agency believes crypto firms are illegally operating outside of U.S. securities laws and instead lean on other licenses that provide minimal consumer protection. “Those representations, while nominally true, don’t cover their activity,” the person said.

Bankman-Fried had big ambitions for FTX, which by this year had grown to more than $1 billion in revenues and accounted for about 10% of trading in the global crypto market, from a standing start in 2019. He wanted to build a financial app, where users could trade stocks and tokens, transfer money and bank, according to an undated document titled, “FTX Roadmap 2022.”

“Step 1” toward that goal, the “Roadmap” document said, “is to become as licensed as reasonably possible.”

That’s where FTX’s acquisition spree came in, according to the documents. Instead of applying for every license, which can take years and sometimes uncomfortable questions, Bankman-Fried decided to buy them.

But the strategy also had its limits: At times, the companies it acquired didn’t have the precise licenses it needed, the documents show.

One of FTX’s goals, according to the documents, was to open up the U.S. derivatives markets to its customers in the country. It estimated the market would bring additional trading volume to the tune of $50 billion a day, generating millions of dollars in revenue. To do that, it needed to persuade the CFTC to amend one of the licenses held by LedgerX, FTX’s newly acquired futures exchange.

The application process went on for months, and FTX had to pony up $250 million for a default insurance fund, a standard requirement. FTX anticipated the CFTC could ask it to increase the fund to $1 billion, according to minutes of a March meeting of its advisory board.

FTX collapsed before it could get the approval, and has now withdrawn its application.

Buying companies for licenses also had other advantages, the documents reviewed by Reuters demonstrate: It could give Bankman-Fried the access he desired to regulators.

A prime example is the IEX deal, which was announced in April. In a joint interview to CNBC, Bankman-Fried and IEX CEO Brad Katsuyama said they wanted “to shape regulation that ultimately protects investors.” What matters the most here, Bankman-Fried added, is that “there is transparency and protection against fraud.”

Reuters could not determine how much FTX paid for the stake.

Bankman-Fried was invited to meet SEC Chairman Gary Gensler and other SEC officials along with Katsuyama in March.

A source close to IEX said the purpose of the meeting was to let the SEC know in advance about its deal with FTX, which had not been publicly announced at that point, and to discuss the possibility of IEX creating a trading venue in digital assets, such as bitcoin. FTX’s role was to provide the crypto-trading infrastructure, the source said.

SEC officials outright rejected their initial plan because it would have involved the creation of a non-exchange trading venue that is more lightly regulated, something the agency opposes for cryptocurrencies, the source familiar with the SEC’s thinking said.

Reuters could not determine the extent of Bankman-Fried’s involvement in subsequent conversations with the SEC. In their mind, SEC officials had agreed to meet with Katsuyama in March, and Bankman-Fried was just tagging along, the source familiar with the SEC’s thinking said. He kept mostly silent during the meeting, with Katsuyama in the “driver’s seat,” the source added.

Whatever his involvement, FTX talked up its discussions to its investors. In a September meeting of its advisory board, FTX said talks with the SEC were “extremely constructive.”

“We are likely to have pole position there,” it said, according to the meeting minutes.

The person familiar with the SEC’s thinking said they would dispute FTX was in the “pole position.” Anything the SEC did to regulate crypto trading would be open to all market participants, the source said.

The source close to IEX said the exchange never entered into any operational agreements with FTX, adding that it never got to that point.

A May FTX document provides a rundown of FTX’s contacts with individual regulators. The document, which has not been previously reported, shows how in most cases FTX was able to resolve the issues that cropped up.

In February, for example, South African authorities published a warning to consumers that FTX and other crypto exchanges were not authorized to operate there. So FTX entered into a commercial agreement with a local exchange to continue providing the services. “FTX is now fully regularised in respect of its current activities in South Africa,” FTX said.

The regulator, South African Financial Sector Conduct Authority, did not respond to a request for comment.

The May document also shows that FTX had a brush with the SEC. The SEC had conducted inquiries earlier this year into how crypto companies were handling customer deposits. Some firms were offering interest on deposits, which the SEC said could make them securities and should be registered under its rules. In the list of its regulatory interactions, FTX noted that the inquiry was looking at whether those assets were being “lent out or otherwise used for operational purposes.”

This month, as Reuters has reported, it emerged that FTX had done just that, moving billions of dollars in client funds to Bankman-Fried’s trading firm, Alameda Research.

In the May document, FTX said the SEC’s exam staff, which scrutinizes market practices that could present a risk to investors, was concerned about a different matter: a rewards program that it offered to customers, under which it paid interest on crypto deposits.

According to the document, FTX told the regulator it did not have the same issues as products from other providers that the agency had investigated.

“We confirmed these were solely rewards based and do not involve lending (or other use) of the deposited crypto,” FTX wrote. The SEC wrote back, saying it had completed its “informal inquiry” and did not need further information “at this time.”

The SEC had no comment on the inquiry. In an email to Reuters, Bankman-Fried wrote: “FTX’s response there was accurate; FTX US’s rewards program did not involve lending out any assets.”