A former FBI agent recently disputed some “proof” that a hooded man seen in a surveillance video was the offender who fatally stabbed four University of Idaho students.

Jennifer Coffindaffer, the former agent, recently shared a message she received on Twitter which included comments about the hooded man or “Jack S.” The screenshot Coffindaffer posted includes many allegations about the hooded individual, although none have been officially confirmed by police.

“Summing up proof against Jack S: 2015 photo,MAY be on family vacay in Africa,MAY have been expelled from a Frat,MAY have been kicked out of bar,was “creepy”at grub truck,not talking to media.If I tried to get someone charged for murder w/this I should’ve been fired,” Coffindaffer wrote in her tweet responding to the message she received. 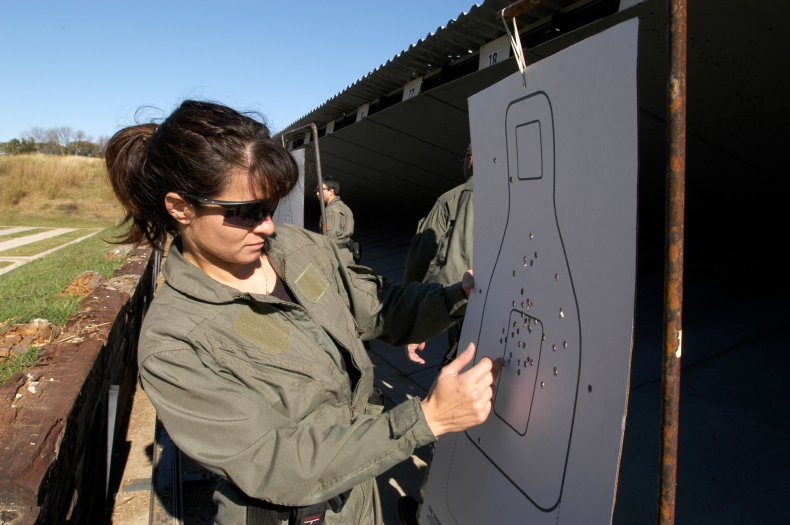 FBI Special Agent Jennifer Coffindaffer, along with other members of the Dallas FBI SWAT (Special Weapons and Tactical) team, go through gun range and training exercises at Dallas Sheriffs’ facility in Dallas. On Tuesday, December 6, 2022, Coffindaffer spoke with Newsweek about the ongoing investigation into the fatal stabbing of four University of Idaho students.
Greg Smith/Corbis/Getty

The remarks by Coffindaffer come as police in Moscow, Idaho continue to investigate the fatal stabbings of Kaylee Goncalves, 21, Madison Mogen, 21, Ethan Chapin, 20 and Xana Kernodle, 20. No suspect has been identified by police and no weapon has been found. Police have said that they are actively searching for a fixed-blade knife that they believe was used in the crime.

Since the investigation began, there has been widespread attention across social media, with many looking at the hooded man as well as others as possible suspects in the crime. However, the Moscow Police Department publicly said that the “Male in the Grub Truck surveillance video” is not believed to be involved in the crime.

Summing up proof against Jack S:
2015 photo,MAY be on family vacay in Africa,MAY have been expelled from a Frat,MAY have been kicked out of bar,was “creepy”at grub truck,not talking to media.If I tried to get someone charged for murder w/this I should’ve been fired#moscowidaho pic.twitter.com/rEisW4m9Hx

While speaking with Newsweek on Tuesday, Coffindaffer explained that she posted the tweet about Jack S. to “synopsize that information which is completely scant of any factual basis that connects him to this crime.”

“Whoever was particularly assigned to verify this alibi, this is a very easy thing to do, they’re not complicated…first of all, they interviewed him, which would pin him down to exactly what he says his whereabouts were,” Coffindaffer told Newsweek.

“It’s going to be very easy for them to come up with a footprint of where he was,” she said.

Despite police saying that they do not believe this hooded individual was involved in the crime, Goncalves’s mother, Kristi, recently told NewsNation that she felt like “there’s been a couple individuals that were cleared very fast that maybe should not have been.”

Coffindaffer explained that there’s always a “possibility” that investigators could go back and review interviews with individuals who were ruled out.

“Even though they firmly believe he is alibied and I believe that because they have come out publicly and stated that…that does not mean they put on blinders,” Coffindaffer said.

Newsweek reached out to the Moscow Police for comment.