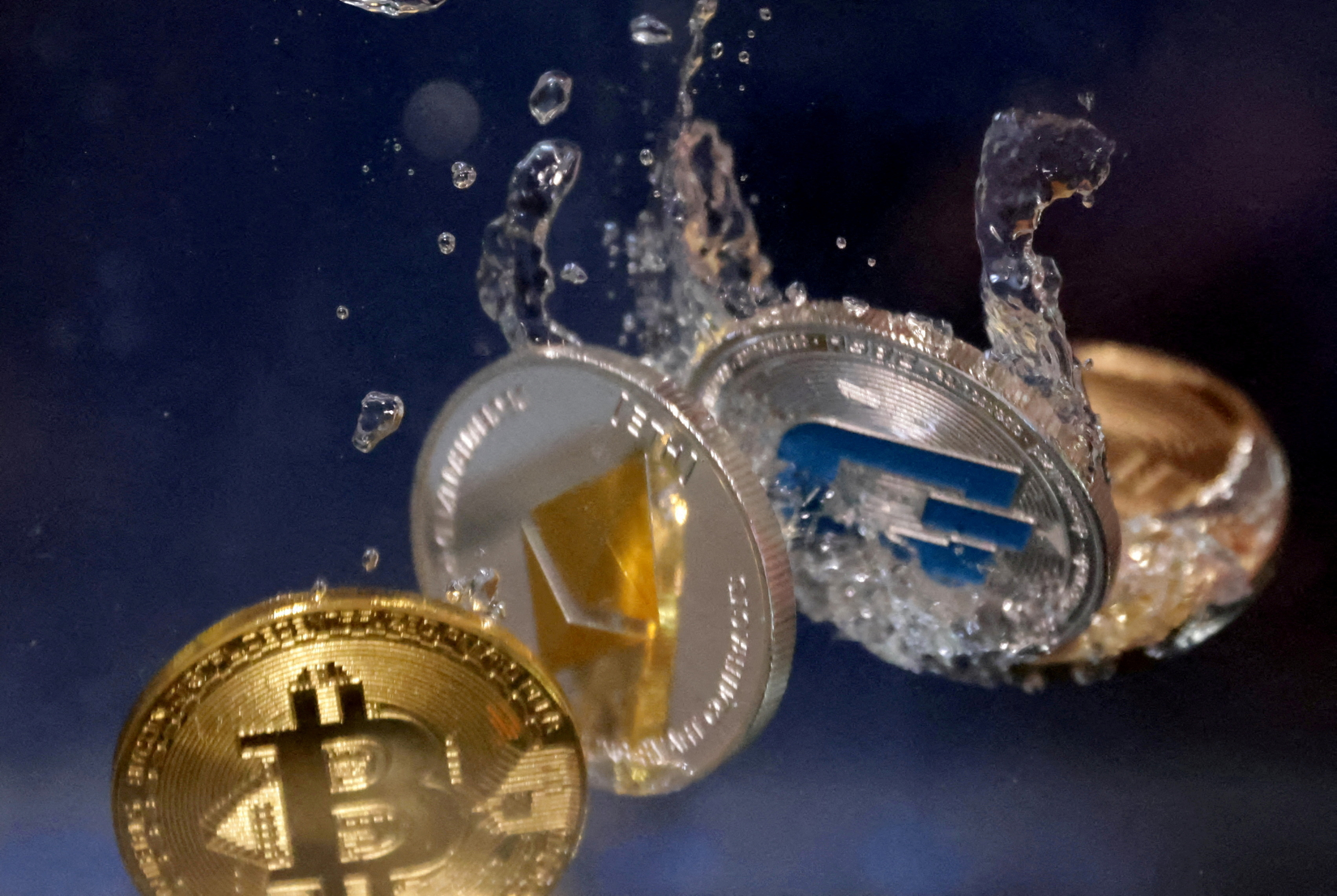 Representations of cryptocurrency Bitcoin, Ethereum and Dash plunge into water in this illustration taken, May 23, 2022. REUTERS/Dado Ruvic/Illustration/File Photo

FTX filed for bankruptcy protection in the United States on Friday in the highest-profile crypto blowup to date, after traders pulled $6 billion from the platform in three days and rival exchange Binance abandoned a rescue deal.

Liquidators in the Bahamas said late on Tuesday they were challenging the validity of U.S. bankruptcy proceedings, adding further uncertainty for crypto investors.

A spokesperson for Genesis Global Trading, the parent of Genesis Global Capital, which also offers crypto trading and custody services, said on Wednesday they “have taken the difficult decision to temporarily suspend redemptions and new loan originations in the lending business.”

The spokesperson said Genesis was working to “shore up the necessary liquidity to meet our lending client obligations,” and that Genesis’ trading and custody businesses were unaffected.

Genesis’ ultimate parent Digital Currency Group, an investor which also owns crypto asset manager Grayscale, said on Twitter that the decision to suspend redemptions “was made in response to the extreme market dislocation and loss of industry confidence caused by the FTX implosion”.

The suspension at Genesis “has no impact on the business operations of DCG and our other wholly owned subsidiaries”, Digital Currency Group said.

Joseph Edwards, investment partner at Securitize Capital said: “This shouldn’t be seen as a step up, but rather as a step outwards, given that Genesis have a number of significant regulated counterparties – there will be discomfort being felt among OTC desks in Europe and North America in particular.”

U.S. cryptocurrency exchange Gemini said in a blog that Genesis “will not be able to meet customer redemptions” within the agreed 5 business days for users of Gemini’s “Earn” product, where Gemini users can receive interest on balances they deposit on the platform by allowing Gemini to lend them elsewhere.

Several other crypto firms, including Crypto.com and stablecoin Tether said on Wednesday they had no exposure to Genesis. A spokesperson for the New York Department of Financial Services said it is monitoring the situation at Genesis.

Genesis is not alone in facing fallout from FTX’s collapse.

Crypto lender BlockFi, which previously acknowledged it has significant exposure to FTX, plans to lay off workers while preparing to file for bankruptcy, the Wall Street Journal reported on Tuesday.

The proposed class action lawsuit filed late on Tuesday in Miami alleges that FTX yield-bearing accounts were unregistered securities that were unlawfully sold in the United States.

Representatives for Bankman-Fried, Brady and Osaka did not immediately respond to requests for comment on Wednesday.

Bloomberg on Tuesday also reported that U.S. and Bahamian authorities were discussing the possibility of bringing Bankman-Fried to the United States for questioning.

But Clayton Fernander, the Commissioner of Police in the Bahamas, said in Nassau on Wednesday on the sidelines of a police conclave that police have not interviewed or met with Bankman-Fried and that Fernander has not been in communication with U.S. authorities in relation to the matter.

FTX group’s liquidation is proving a subject of dispute, as the exchange’s Bahamas-based liquidators filed a Chapter 15 petition in a U.S. bankruptcy court in New York late on Tuesday questioning the validity of the U.S. bankruptcy proceedings.

The liquidators, appointed by a Bahamas judge on November 10, said that because their filing came before FTX’s bankruptcy filing in the United States, they were the only ones authorised to begin bankruptcy proceedings for FTX and its affiliates.

The U.S. bankruptcy proceedings involve multiple FTX group companies with more than 100,000 creditors, a number which could surpass 1 million.

Bahamas Office of the Prime Minister said on Wednesday Bahamas did not have sole oversight of FTX’s worldwide operation, and so far it had not identified any deficiencies in its regulatory framework.

Elsewhere, crypto exchange Binance, in a response to a hearing on the crypto industry by a British parliamentary committee on Monday, said it had not contributed to FTX’s collapse.

As FTX’s problems emerged last week Binance initially said it would sell its holding’s of FTX’s own token FTT, then signed a non-binding letter of intent to buy FTX’s non-U.S. assets before abandoning the deal.

The U.S. House Financial Services Committee said Wednesday it plans to hold a hearing in December to investigate the collapse of cryptocurrency exchange FTX.