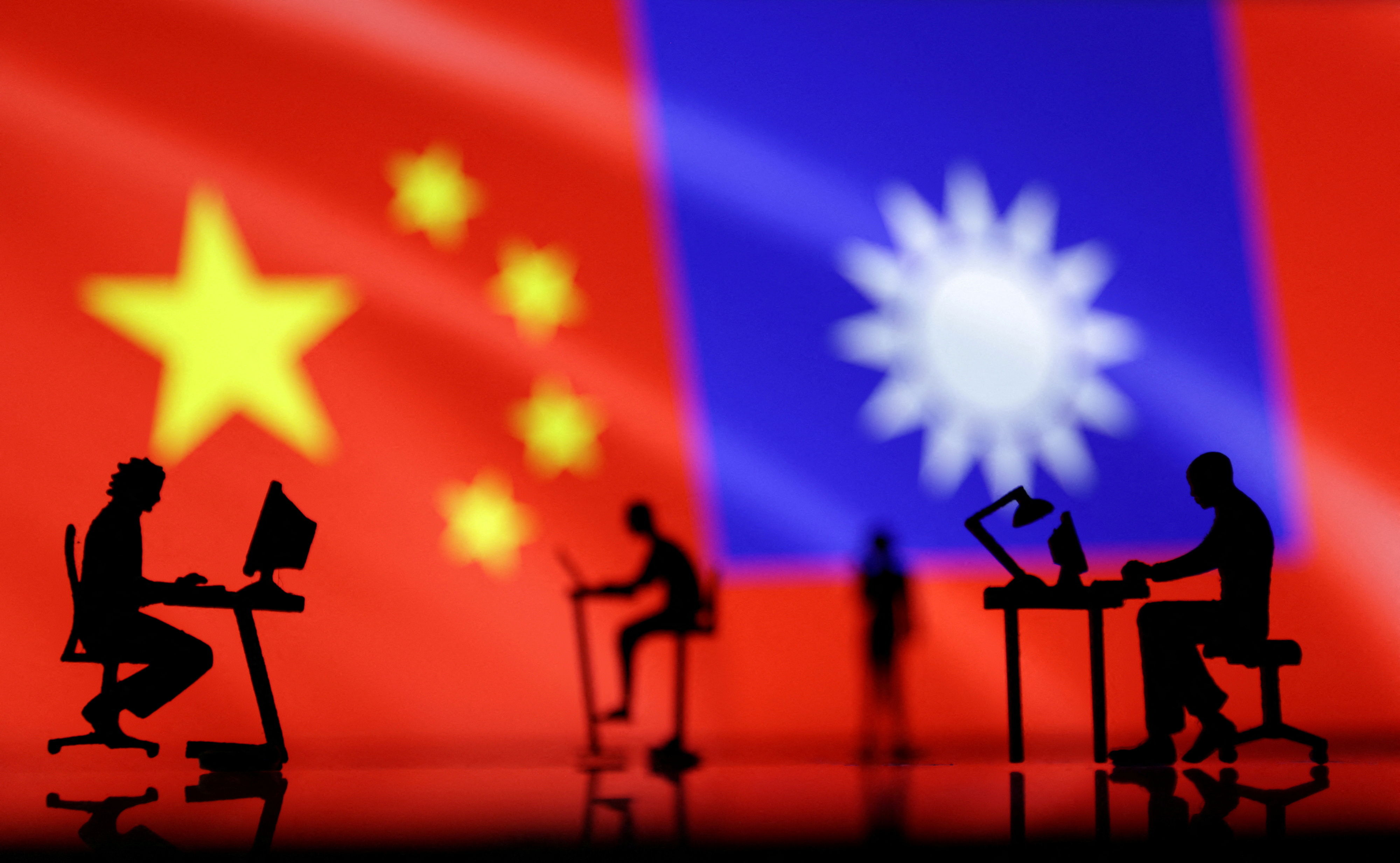 Small figurines with computers are seen in front of Chinese and Taiwanese flags in this illustration, August 6, 2022. REUTERS/Dado Ruvic/Illustration/File Photo

When Chinese authorities detained a Taiwanese citizen in China in August for an alleged violation of security laws, officials in Taipei sent messages of concern to Beijing seeking details.

The missives went unanswered, like many of the texts and faxes Taiwan’s Mainland Affairs Council has sent to Beijing’s Taiwan Affairs Office over the past six years, according to a Taipei-based person familiar with the Taiwanese government’s China policy. “They ignored us,” the person said.

China ended formal high-level communication with Taiwan’s government in 2016 after the island’s voters elected Tsai Ing-wen, whom Beijing considers a separatist, as president. But with Chinese jet fighters mounting almost daily manoeuvres around Taiwan since U.S. House Speaker Nancy Pelosi visited the island in August, concern is growing among some security experts that the official silence poses risks when the two militaries make frequent, close-in contact.

“The absence of communications aimed at managing the relationship is worrisome,” said Bonnie Glaser, a Washington-based security analyst with the German Marshall Fund of the United States. “There is a risk of misreading each others’ intentions and attendant miscalculation.”

A communications channel exists — a remnant of a more-cordial era in cross-strait relations under former Taiwanese leader Ma Ying-jeou, who met with Chinese President Xi Jinping in 2015 and signed economic and trade deals.

But the minister-level hotline has sat frozen in recent years while Beijing has grown its military capability and ramped up threats to bring Taiwan under its control, by force if necessary. To this day, the channel remains a neglected conduit through which officials could ease tensions in emergencies or arrange discussions between the Chinese Communist Party and the Tsai administration.

“Since she assumed office, it never rang,” said Alexander Huang, who was deputy minister of Taiwan’s Mainland Affairs Council in 2003-4 and still serves on its advisory board.

“The communication line is of utmost importance when the tensions are building up,” added Huang, who is the top representative in the United States for the Kuomintang, Taiwan’s main opposition party.

Tsai, elected on a platform of defending Taiwan’s sovereignty, has offered talks with Beijing on the basis of equality with mutual respect. China has rebuffed her because Tsai refuses to recognise the “1992 consensus,” which deems Taiwan and China part of one China but allows each side to interpret what that means.

The lack of dialogue has become more concerning as cross-strait tensions have intensified, said Jacob Stokes, a senior fellow at the Center for a New American Security.

“We need to prepare the offramps ahead of time, because if we get into a crisis and there are no offramps, then that’s where a very dangerous situation — a situation that’s even more dangerous than it is now — could occur,” said Stokes, citing collisions and the takedown of a plane as potential flashpoints.

Taiwan and China have no embassies in each other’s capitals. Neither recognises the other’s government, a legacy of when officials from the defeated Republic of China fled to the island after Mao Zedong’s communists won the Chinese civil war and proclaimed the People’s Republic of China in 1949. Taiwan rejects China’s sovereignty claims and vows to defend its freedom and democracy.

China’s Taiwan Affairs Office did not respond to a request for comment.

Mutual mistrust extends lower down the chain. While some Taiwan officials who work on China policy have cellphone numbers for their Chinese counterparts, they have stopped making calls since 2016, according to the person familiar with Taiwan’s China policy, who described the numbers as “cold hotlines.”

“They won’t answer anyway. What’s the point?” the person said, adding that the calls would connect but Chinese officials wouldn’t pick up. “You can’t wake up someone who’s pretending to be sleeping.”

Still, at an operational level, the two sides maintain contact on routine matters such as transport, customs and personal assistance requests. Based on a long-standing practice, faxes continue to be exchanged between two semi-official organisations that handle routine affairs: Taiwan’s Straits Exchange Foundation and China’s Association for Relations Across the Taiwan Straits.

The council told Reuters that while Chinese officials do not reply directly, they have handled Taiwanese requests when needed or responded through public statements.

Third-party channels also exist involving business people, academics and journalists. One chat group on Chinese app WeChat contains more than 100 scholars — one-third Taiwanese and two-thirds Chinese. While their interaction continued through the Pelosi tensions, “it doesn’t carry weight” and no one is authorised to speak officially, said a person familiar with the group.

China is Taiwan’s top trading partner, and hundreds of thousands of Taiwanese work in China. Some entrepreneurs are regularly in touch with officials on both sides, reflecting the close cross-strait business links.

But at higher levels, both sides are reduced to communicating via news conferences that can descend into trading barbs. China this year labeled Tsai’s administration “evil” while Taiwan called China “incredibly absurd”.

The last publicly known face-to-face communication between senior figures from both sides occurred in August when Andrew Hsia, the deputy chairman of the Kuomintang, went to China and met a vice head of its Taiwan Affairs Office.

Taiwan’s government denounced the trip, but the Kuomintang says such outreach is needed now more than ever.

“Sometimes, it’s an inconvenient necessity,” said Huang, adding that opening communication channels between Taipei and Beijing could improve understanding of each other’s intentions and help to manage and defuse potential crises.

Some security analysts caution that communication has its limits.

“The bottom line is: If China wants to fight a war, it escalates. If China doesn’t want to fight a war, it doesn’t escalate,” said Oriana Skylar Mastro, a fellow at Stanford University’s Freeman Spogli Institute for International Studies. “You’re not going to get a war on accident.”

Even if the two sides did talk, “Chinese diplomatic channels are not being used to negotiate compromises,” said Drew Thompson, a former U.S. defense official now at the Lee Kuan Yew School of Public Policy in Singapore.

“Under Xi Jinping, they’re being used to issue directives and tell other countries what they need to do if they want to maintain good relations with China. It’s Xi’s way or the highway.”